Ready for more? Me neither, but we hold no power in this relationship, so buckle up.

Our big trip this week is to New England, Connecticut specifically, but before you go thinking this Bachelorette is of the laid-back, humble variety just for keeping things stateside thus far, let’s give her a few more episodes.

Dylan (sorry, who?) gets the first one-on-one date this week, and right away it’s clear that this guy is stressed and sad.

Dylan on the one-on-one date.

Andi’s planned a date aboard a steam train that winds its way through the New England countryside. You can’t make a date romantic just by calling it that.

Knowing what comes next, I feel bad for saying it, but I’ve seen domesticated cats look more amused at their owners than Andi and Dylan looked on their train ride. If they had any interesting conversation at all, we’re not privy to it. They talk like strangers who got randomly seated next to each other on an empty, old fashioned steam train to Sob Station.

By dinner time, I’m ready to enter the station and deboard. But Andi clearly hasn’t thought through how much time is enough time to spend on a train. At least give the guy a bed and a magazine. In case we all weren’t miserable enough yet, it’s time to talk Painful Memories.

Dylan and Andi sit in the presence of food and talk exes. Then with a bit of prying from the Bach, Dylan finally says what’s been weighing him down. He tells Andi about the unfortunate deaths of both of his siblings. The New Englander basically admits that if Andi’s aim was to force him down heartwrenching memory lane and call it a date, she #nailedit.

Andi feels bad. He gets the rose, and then in an act more likely to earn her the title Best Babysitter Ever than Compassionate Girlfriend Material, Andi distracts Dylan from his sadness by letting him toot the horn. And that’s no innuendo. Her actual end-of-the-date surprise for him is letting him pull the train horn.

The next day, the group daters wander down to the hotel basketball arena, and this trip is starting to remind me of the sorority “retreat” we took to Cape Cod when we never left the hotel. I wonder if Andi also spent an entire semester’s money on one EPIC formal.

On the court, some WNBA rockstars are here to school the boys in bball, and school them they do. Nick says it best, “We are running around like a bunch of infants and they are barely trying.”

To put some air back in their sails, Coach Andi benches the WNBA starters for the first time in their lives, and the boys break into teams: Rosebuds versus Five of Hearts.

Andi’s alluded to her history of dating former pro athletes before, but it’s clearer than ever that the athlete thing does it for her when the boys start running the court. She is practically orgasming watching them play.

So she turns up the heat a bit and announces that the winning team will spend the rest of the night with her, while the losers go home.

Brian, an actual basketball coach, steps into the spotlight at this point. He makes shot after and shot and I’m fairly sure it results in Andi’s immaculate impregnation. Led by Brian, the Rosebuds win. 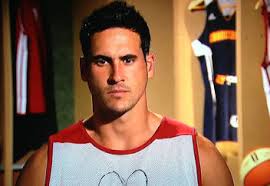 Allow us to interrupt this broadcast for just one moment to announce that at this point in our viewing session the one and only pantsapreneur favorited a certain Bachelorette Fantasy blog’s tweet. Dear JJ, the league is fine. Please send pants. 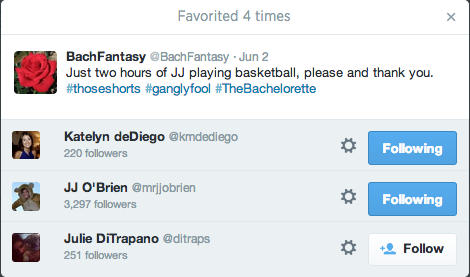 Everyone gets cleaned up and they meet for drinks within the confines of the hotel. The first one-on-one conversation of the night is between Andi and Eric, and Andi is on the attack. Girlfriend’s body language is annoyed and she’s pretty blunt about telling Eric she wants him to open more. I get it though. The surest way to get me to bare my soul is to insist it on loudly. Eric does his best to follow her orders and talks a bit about his struggle leaving his religion, but the tone was already set, and it wasn’t one that ended with a hug or a butt slap.

On a brighter note Brian leads Andi back to where he made all the magic happen earlier in the day. They shoot some hoops just the two of them. Points to him for noticing that sports are Andi’s panty-dropping kryptonite. Then Brian’s entire life peaks when Andi challenges him to half court shot, which he makes without using the backboard and celebrates without coming off like an asshole. Andi practically assumes baby making position at this point, but Brian fails to notice, which, if you’re not her, is pretty endearing.

They head back to the party. Per the use the Bach gets passed around like ragdoll/tallisman. Each man that holds it has a turn at sharing Feelings and Beliefs.

And then, boom, Coach Brian mans up to right the wrong he made post-half court victory a few minutes ago. He walks Andi back to the basketball court and plants on her the kiss that he should’ve earlier. Coach Brian > Pro athletes current and former.

Back at the lounge, Nick has no problem reading Andi’s signs — hello public thigh caress — but Coach Brian gets the group date rose. He calls it better than winning a State Championship, so let’s hope his team isn’t watching.

Date number three and we’re still at the hotel. Marcus doesn’t care until he finds out he’s going on the dumbest date ever. Why two people who both hate heights wouldn’t talk themselves out of rappelling down their hotel and decide instead to use the elevator and then get the fuck off the property for a few hours, I’ll never know.

How normal people react to going over a hotel roof.

They go the rappelling route. Well, at least Marcus does. Andi opts for hanging over the ledge of a hotel rooftop for a while. Then in a moment that reminds me all too much of my parents trying to assemble IKEA furniture together, Marcus “encourages” Andi over the ledge with incessant “lean back” and “look at me” yells. Yeah, because the reason she wasn’t rappelling was because she didn’t know how.

In typical Bach fashion she conquers her fear, they kiss mid-adventure sport, and in an unseen twist, they rappel past the guys’ suite, waving as they pass them. How they resisted the urge to smush their faces against the window at them is beyond me.

Later they chat near food. Marcus curses the guy that cheated on Andi, which I suppose is the only way to discuss the last loser that your girl dated. Hey, I mean it gets him the rose.

After dinner they dance for a crowd and to a country singer I don’t know but they seem sufficiently enthused by. Andi’s dance moves aren’t as bad as I remember them, but the duck face she puts on while she dances is hilarious and makes me glad that my dance face will never be on national television. I’ve seen it in pictures and it ain’t cute.

Rose ceremony day kick off with Andi in her hotel room getting a love letter from a secret admirer. Quit it already, Bukowski!

Then the cocktail party starts. The music is weird approaching her one on one time with Marquel so we think something’s up, but it’s a false alarm. In an act of winning self-deprecation, Marquel teaches her some self defense moves in case he’s not always around. #cute. #morecookies.

Then Eric pulls her aside, and I think it’s to open more, but it’s not. Things go downhill fast in their disagreement about who’s being most open and authentic. Without being petty, this is our take on it.

We all fell in love with Andi last season when she verbally whooped Juan Pablo’s ass. This conversation with Eric feels familiar, though Andi’s verbal sparring here seems stubborn and close-minded rather than badass. While Eric could have made his point a little more clearly and delicately, Andi shuts down right away and, in the end, came off like a drama queen. Was Eric’s feedback necessary? No. But did Andi blow it out of proportion? Yes indeedy.

Andi excuses Eric from the show.

Then Chris Harrison arrives like an angel out of a pig pen and not a moment too soon. Given Eric’s unexpected and dramatic exit and his subsequent sudden death, in place of the rose ceremony Chris and Andi chat about Eric, which is nice. Again, our condolences to Eric’s loved ones.

We’re told that Tasos leaves. Aw, Tasos! We’re not worried about you (but maybe lose the earring?).

P.S. You can get an email every time we post by entering your email address at the bottom of the page. Did you know we’re also on Twitter? We live-tweet every episode, often while drinking wine and yelling at the TV, so do as JJ does and follow our Tweets.