Was it sweeps week or what? The Bachelor pulled out all the stops last night and reminded us why it’s the best worst TV show of all time.

Clare the the hairdresser gets the first date. She’s blindfolded and led to a “mysterious” location. It turns out ABC has created a faux-winter wonderland, in the middle of L.A.!!!!!, which Clare will remind you of twelve more times.

It’s one of the most Bachelor-y dates to have ever been Bachelored: ice-skating, sledding in bikinis, and even fake snowfall. Not pictured: a 40-year-old production assistant with a beer gut standing on a ladder and holding the snow hose above Clare and Juan Pablo.

They cavort next to some sorry-ass snowmen and take a dip in the hot tub, where Clare begins her seduction by talking about her dad’s untimely death. Look, it’s a sad story but also a total boner squasher and not exactly first date fodder. Clare sets off my crazy alarm. She just does.

Then Juan Pablo surprises Clare with a private concert. Javier Bardem reprised his role in No Country For Old Men to serenade the duo, who slow danced in bikinis. She gets the rose. Eh. It’s all sort of boring. 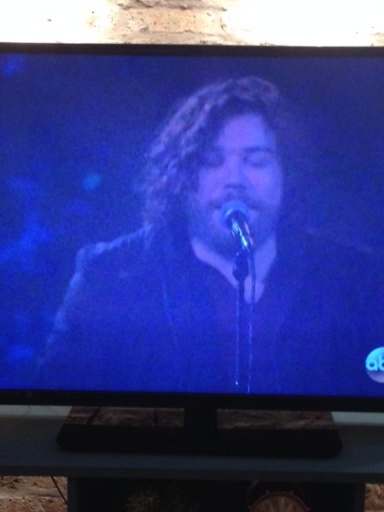 Meanwhile, back at the ranch, resident free spirit Lucy takes her first bath in years in the outdoor pool, sans bathing suit top. They show the dog fetching the next one-on-one date card, proving that he is the most talented creature on this show. Next trick: rolling joints for Lucy.

Kat gets the second one-on-one, and JP whisks her off on a private jet. She surmises that they might be headed to New York City or somewhere “private” and “romantic.”

Close, Kat. Welcome to Salt Lake City, the Big Apple of Utah. Juan Pablo dons a neon tracksuit and hands Kat a matching tennis outfit. They each take massive amounts of E and sprint off the plane to what appears to be a raging EDM concert, or my personal hell.

Instead, it turns out to be a 5K. It’s never made exactly clear why they have to travel 1,000 miles to find a 5K but let’s go with it. After running and stopping to twerk along the way, JP and Kat have to gyrate on stage in front of throngs of screaming teens. Kat is a good sport, but what choice did she have?

She gets the rose.

They head to a danky warehouse for a calendar photo shoot of adoptable dogs. The creative director, Captain Bluebeard, emerges to discuss the details of the shoot and NOBODY BATS AN EYE. That’s how you know this cast of ladies is certifiable.

It’s the least sexy photo shoot ever. I was actually howling with laughter at Kelly the dog-lover, who looks like an alien with chicken pox.

Captain Bluebeard plunks Lucy—the nudist who has no job to lose—in a fire hydrant costume, and asks Andi the attorney and Elise the first grade teacher to pose in their birthday suits with only a small sign saying “Adopt Me.”

Bachelor, you can be so cruel.

Elise pawns off her skimpy cardboard sign on Lucy, who promptly takes a nude stroll around the block. Andi is majorly freaked out about airing her kibbles and bits on-camera, but then decides to do it after a weak-ass pep talk from JP. The lesson here is that if a man asks you to take off your clothes on the first date, you should protest weakly, then do it anyway.

Post-photo shoot, they sit on a windy rooftop. Victoria boards the express train to Hammer Town, which let’s face it, is the only way I would’ve gotten through this day too. She talks about straddling people and doing the “hymen maneuver” on JP. Can’t make this stuff up.

Pretty soon, her antics have drawn the attention of the whole cast, including JP, who tries to talk to her through a locked bathroom stall. Imagine if Victoria went all the way: JP would have to take turns knocking on Camila’s and Victoria’s locked bedroom doors, talking in soothing tones, and trying to reason with them.

Kelly got the group date rose for looking like an alien at the photo shoot. Derp.

Victoria got sent to a hotel that night (where she probably ordered hella mozzarella sticks on the ABC tab), so JP gets up bright and early to visit her. She answers the door still in her swimsuit cover-up and her apology is basically like, “I’m soooorrrry, ok? God, get off my dick, mom.” Juan Pablo gently lets her go, and Victoria can return to a life of getting snookered off of “one glass of champagne,” free of the judgmental gaze of a national TV audience.

At the cocktail party before the rose ceremony, Amy L. whips out her news anchor voice and “interviews” JP with an invisible microphone. It’s awkward. She will pay for it. Cassandra does the pretty-cry over missing her 2-year-old son. More experienced mama Renee swoops in with advice and I think JP starts to go gaga for both of them.

Lots of people get roses, except for Amy L. and Chantel, who (to their credit) exit with as much dignity is possible on this shitshow.

Now this, ladies and gents, is TV.

All aboard the train to dysfunction junction,

What was your favorite part of last night’s show?